For me the weekend started on Wednesday evening! I arrived at Pernand and was off straight away to dinner with Marie-Luce chez elle. Delicious Jura Morteau sausage with potatoes, salad and camoillotte cheese and a Jura white.

Thursday was an early start for a French magazine shoot followed by a quick signing session at Domaine Claude Chevalier and Domaine Dubreuil-Fontaine in Pernand, a major subscriber to the book and a great support of my work on the Hill.

The afternoon was a  visit to Domaine Jean-Marc and Anne-Marie Vincent in Santenay, good pictures and a lot of chat.  J-M claims to talk a lot, but I think he has met his match ! A very enjoyable visit and another lesson in how Burgundians think.

Then followed a race around to deliver promised books for several boys and girls who appear in the book.

Finally dinner and some French tuition with friends we’ve made in Magny-Villers, Christian and Anne-Marie. Magny is very close to Corton and some say I should have visited more, but its not on the Terroirs de Corton map…

A very nice dinner “en famille” is always a great pleasure and it was a change not to be talking about wine. Except that we did enjoy a 1983 Côte de Nuits Villages from a domaine sadly since disappeared. Village wines continue to astonish me. Of course it will depend on the vintage as with the two 1976 villages I had in 2013 from Aloxe and Chorey. The dry year provided the tannin needed for such longevity.

After a postponement in Vosne I was free for a couple of visits to thank subscribing vignerons and sign a few books. Dedicating in French is a new challenge, can’t say “large soif !” every time. I hope they will forgive my mistakes…

My visit to Clos de Tart was a mixture of sharing a tasting with a bunch of German professionals and half an hour with Sylvain Pitiot whose map of Corton adorns the endpapers of the book. Sylvain is always calm and very photogenic and has known me a while so it was a successful but fairly brief session.

I was then free until a session with Jean-Charles Boisset in Nuits at 5.30 so I went back to Auxey-Duresses to see how my good friend Tom ” The Hungry Cyclist” is getting with his business showing cyclists  a good time on the roads and at the tables of Burgundy. He has converted a ruined watermill into guest accommodation over the summer and begun receiving guests.

I found him clearing out the millpond, hoping for interesting finds !

Having cycled from NY across the US and all the way south through Mexico in search of the perfect meal, Tom is the epitome of good humour and indefatigability. 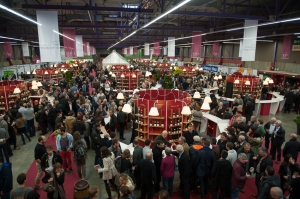 Serious amount of new wine to taste here, and winemakers to rub shoulders with, if you know who to look for. Entrance +glass is 25 euros during the Hospices weekend.

After a brief visit to the Palais de Congrés in Beaune, its off to catch JCB as he passes through Burgundy. 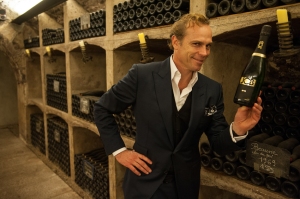 JCB fooling about with his new Cremant, “21”

Then a dash back through the rain to Beaune to enjoy a tasting, concert and dinner with Neil Beckett and Philippe Marquezy from World of Fine Wine magazine, courtesy of an invitation from Olivier Halley, new owner of Château de Meursault and Bernard Hervet.
Quite a late night 🙂 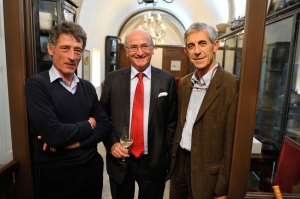 Pianist Michel Dalberto and Bernard Hervet with his cellist son Charles after the concert.

Saturday morning meant a more serious visit to Palais de Congrés before a lunch at La Dilettante in Beaune. 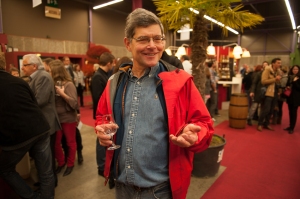 Alex Gambal – an American at the Palais 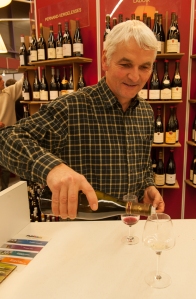 Pierre Cornu at work at the Palais

Gorgeous gougeres at 3 euros/15 help absorb all the liquid!

Walking through Beaune during Hospices weekend is always entertaining after the travails of finding somewhere to park!

Beaune, colourful and noisy during this weekend.

Trying the jambon at La Dilettante

joining up with Rosi hanson for a fun lunch. A real Burgundy moment – sharing a real and delicious croque monsieur with an American investment banker and hearing of his conversion from Bordeaux! 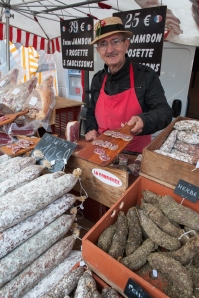 Too good to miss! 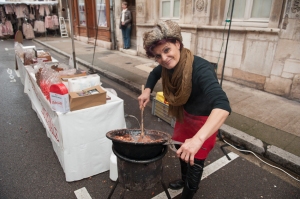 Slaving over a hot pan in rue Lorraine 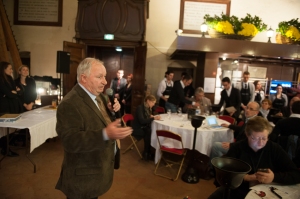 Roland Masse takes us through the 2014 wines

Lucie Cornu, as a student at the Beaune Lycée viticole
poured some of the wines for the press and shared a picture with the star of the day 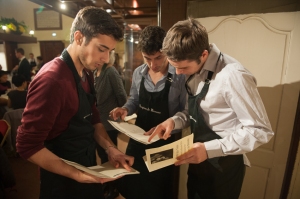 Meanwhile the guys checked out the order of serving 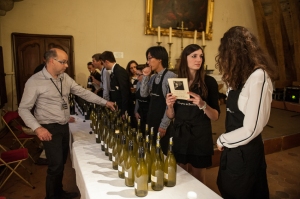 A lot of work ahead for everyone: 2014 barrel samples.

Sunday
Slightly nervous, I am anxious to keep busy before my signing début at 3pm in l’Athenaeum. So I gatecrash the Hospices Sunday morning press conference. Normally its pretty chilly but I find myself down to my shirtsleeves – nervous energy ?

The Sunday press conference, always held in the impressive Salle des Pauvres in the Hospices itself.

Louis-Fabrice Latour and Claude Chevalier answer to the press…

There follows un petit coup and gougères among other delights

At the recommendation of Sylvain Pitiot (our third rencontre in 3 days!)I enjoyed a glass of Pouilly Fuissé from the winner of this year’s Jeune Talent, Romain Cornin of Chaintré. Then foregoing the press lunch I went back to my friend Thierry’s for a snack before my big moment…

Ah, chocolate, that’s what I need to keep me going for 3 hours !

Ready to go at Athenaeum

Dorva from Brazil, first in the queue. Dorva, please send that great photo! 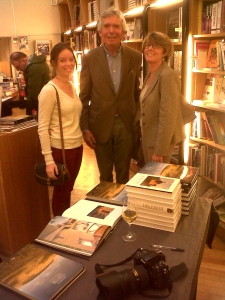 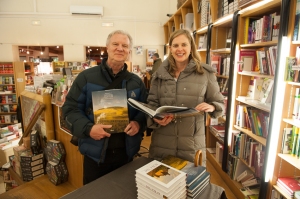 Burghound and Robin Kick MW came to investigate the competition…

Two ofthe boys from Quebec who took home the President’s barrel still had enough euros for a couple of books  ! 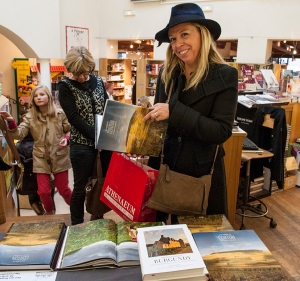 Outside meanwhile, the auction continued but the crowd was a little smaller.

On my way home, the auction is still going on.

Monday and Tuesday: life returns to normal.
Except for my son Joe who today started the Camino de Santiago from St Jean-de Pied-Port. Bon courage et bonne route! On Corton Hill I am on the same road it seems, just a long way behind. 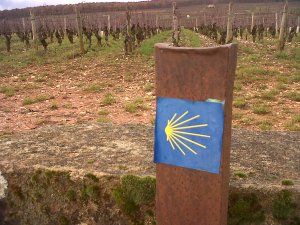 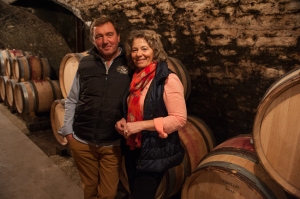 Etienne Grivot in the lift!

Time for a beer with Yves and Serge at the end of a busy day.

A good way to end the day smiling !

This entry was posted on November 23, 2014 by jonwyand. It was filed under Uncategorized .