Last Friday I had a half-written post about a recent overnight visit to Paris with my wife to collect an award for “Corton” from the OIV (see http://www.oiv.int/oiv/info/enprixOIV ) which, after Friday is now irrelevant. It was a couple of days with friends enjoying the city guided by locals. Near the Luxembourg Gardens I had found this.

A wall near the Palais de Luxembourg in Paris.

A few days later, on a visit to friends in Burgundy, we were shown this, in the village of Comblanchien, north of Beaune.
Both items I had felt best left out of the post I was writing.
Now they are horribly relevant, reminders of what France has suffered in the past and has had the strength to recover from.

A small sign of hope for the future perhaps…

My previous visit had been in in 1989 so I was very pleased to have the opportunity to return recently.
Like Argentina earlier this year its a day’s flying to get there and the job was only three days. Still I knew the people at Errazuriz will look after me and plan sensibly. So it was that I arrived on a Tuesday lunchtime at Panquehue where Errazuriz has its Icon winery. We were due to work inside as it is still Spring there and the vines were not showing much life from a distance.

It was also chilly Chile near Andes but further along the Aconcagua Valley towards the coast at Vina Sena things were a little further on. Anyway meeting Eduardo Gonzales the vineyard manager there would warm anyone’s day. Wednesday was an early morning as we had to arrive at the spectacular viewpoint high in the vines around 6 am. Happily it was well supplied with coffee and Chilean “Jammy Dodgers” !
Sunrise was a little less than spectacular but we managed. 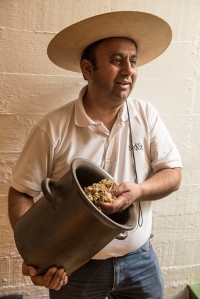 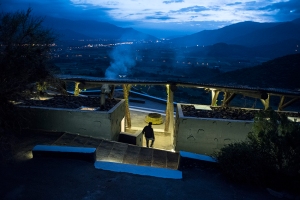 Another super Eduardo, Chadwick, who set up Vina Sena with Robert Mondavi but now owns it 100%. 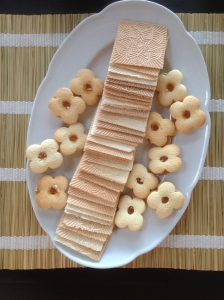 Eduardo Chadwick arrived for his shoot at 8 pleased to find we were not getting the rain he had left behind in Santiago. The clouds duly began to break and by 10 a couple of layers of warm clothing had been shed and some blue sky was available, even if the sun was in the wrong place by now !

Could n’t drive past that tree without stopping to admire it ! 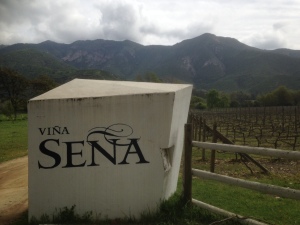 Leaving Vina Sena, will be very happy to see it and Eduardo again !

Lunch back at Panquehue was without Tuesday’s gas heaters and the light was wonderful by 4pm.

Hoping I deserved this !

The Icon winery at Errazuriz.

The winery under a better sky than the day before.

By 6pm I was being escorted to Aconcagua Costa down by the coast and a seafood dinner was provided after a quick dusk tour of a huge rolling vineyard that looked, for once to have been designed for photography.

Raimundo tells me where the sun will rise tomorrow.
I want that app !

Then its off for a Pisco sour and a seafood dinner on the coast.

Sunrise over the Andes seen from Aconcagua Costa

Again we were on hand for Thursday’s spectacular photoshop style sunrise no one believes was real.
Even in the cloudy morning that followed there were views everywhere and when you have to shoot a soil expert and geologist down a metre deep hole, bright sun is not desirable.

Vineyard manager Carlos, my guide Raimundo and geologist Françoise alongside Emmanuel in his hole !

Volcanic rock cut through this schist 60 million years ago !

Françoise and Emmanuel were there on a second soil survey as the vineyard, with its many directional exposures will be home to a number of grape varieties.
Would you believe these experts were Burgundians so a few names were dropped and a little gossip exchanged. I felt right at home !
Again by late morning the sun appeared but after a picnic it was time to head back to Santiago and a crowded flight home.

It was worth every minute of that journey !

When I first had the idea for my book about Corton back in summer 2011 I had no idea the friends it would introduce me to and the new experiences it would lead me into.
I did look forward a little egotistically to the idea of signing books for an army of enthusiastic purchasers at Athenaeum in Beaune. In fact just having MY book on a shelf there ( as opposed to the several books by others I have illustrated ) gives quite a feeling of accomplishment. However when you are a foreigner and completely unknown it is best not to expect too much !
However I did receive an invitation to join more than eighty authors for a two day signing at Château du Clos de Vougeot over a weekend at the end of September. To share that with such people as Jean Robert Pitte, Jean-François Bazin, Dominique Loisseau and Remi Krug to name but a few big names was quite something. As was the inaugural dinner laid on by Alberic Bichot, a wonderful host with a great sense of humour. 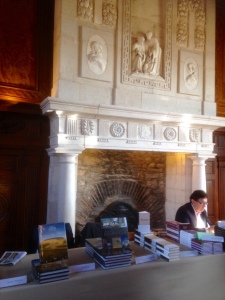 My office for the weekend ! 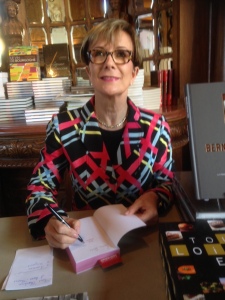 Dominique Loisseau gets to work. 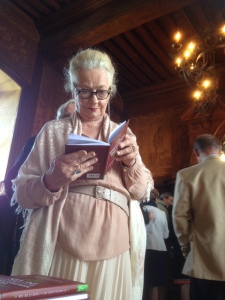 My neighbour gets a visitor

Jean Robert Pitte’s dessert, I’m pleased to say there was enough for everyone and it was delicious. 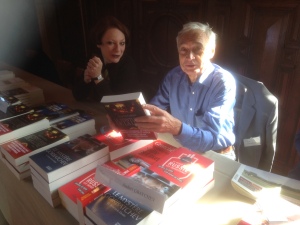 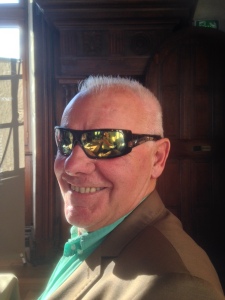 Claude Chapuis, my neighbour who contributed my preface, hiding from the sun but looking cool! 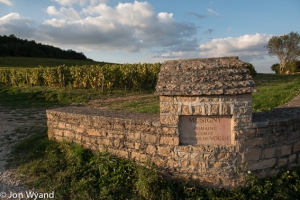 Walking back to Chambolle-Musigny

Just what you need after a hard day at the office ! Hotel André Ziltner at Chambolle-Musigny

How about enjoying that meal sat next to the former press secretary to Gorbachev! I must have bored him but Andrei Gratchev and his wife Alla are charming company and I was able to repay the debt by guiding them the following morning from our accommodation at the Hotel André Ziltner ( the weekend was full of new experiences ! ) in Chambolle-Musigny through the vines of Musigny and Les Amoureuses in glorious sunshine to our tables at Clos de Vougeot.
I have to confess business was a bit slow on Saturday but it was interesting to meet the other authors, even if I felt a little out of my depth!
Lunch was fun, sat between Jean Robert pitta and the local Euro MP I kept very quiet!
I then found I had been put on a panel for a discussion about Burgundy in relation to the New World. Claude Chapuis got me through that one. Did I say the debate was in French!!
That night, a Chapitre at Clos de Vougeot! My first time in a bow tie and dinner jacket for a while. I had photographed them before but to be a guest is very special. The Chevaliers du Tastevin know how to do things and it was fun to be a guest while local photographer Jean-Louis Bernuy had to work!

Saturday evening and a Chapître awaits.

Jean-Louis Bernuy gets ready for a long evenings work ahead

Mr and Mrs Gratchev dressed for the occasion, as we all must !

And there is plenty !

You have to be able to keep up with it though. 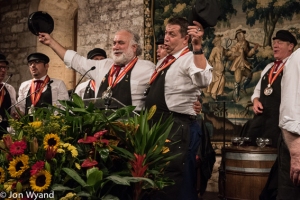 Plenty of encouragement to enjoy the evening.

The end is sight !

Sunday afternoon was the busy time signing and I left to walk back to Chambolle in the evening sun hoping I might be invited again next year, but very grateful for the experiences of the weekend if that was to be the last time. 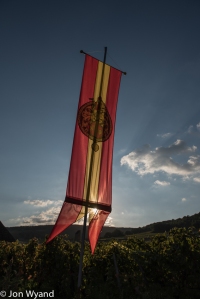 Sunday draws to a close.
Its been a lot of fun !

Friday had been a working day in Chablis in a continuation of the glorious September weather. A visit to the Raveneau family was followed by a sandwich by the River Serein and my first sighting of a Kingfisher, that azure bullet with an orange tip that flashes past at great speed and leaves you feeling altogether happier for the encounter. Then on to see Vincent Dauvissat and Domaine des Hâtes in Maligny before taking up my weekend residence at Chambolle-Musigny. 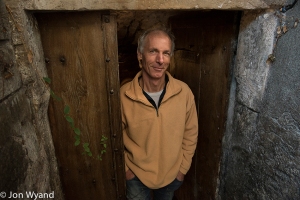 Vincent Dauvissat in Chablis, a reluctant subject, but a rewarding one.

Jean-Marie Raveneau, another Chablis icon who prefers to keep away from the camera.

So on Monday back to work again. To see Chantal and Florian Remy in Morey-St-Denis and Vincent Gros in Vosne-Romanée before spending the afternoon with Dominique Laurent in and around Flagey-Echezeaux enjoying the ride in his Ferrarified Fiat 500 ! 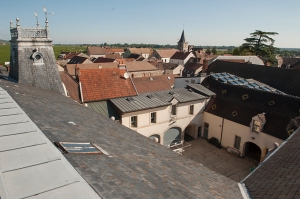 Emptying one of Dominique Laurent’s cuves in Flagey-Echezeaux

Dominique Laurent, no longer the patissier.

But still keen on cars, especially his Ferrarified red Fiat !

On Tuesday before catching my train I was able to meet up with two new winemakers; Jane Eyre-Renard,an half Australian, half Norwegian young lady ( Jane, don’t argue, at my age you are all young! With one or two notable exceptions….) and Anne Morey, Pierre’s daughter. Jane was getting a helping hand from Dominique Lafon to move her wine over to new premises at Château de Bligny, part of the new Wine Studio development set up by Dominique Lafon and Pierre Meurgey to offer facilities to up and coming winemakers just starting out. A great idea!

Jane Eyre-Renard looks the typical exhausted winemaker after the harvest ! 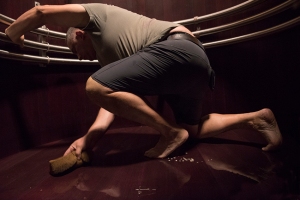 Meanwhile, elsewhere in Meursault they are cleaning up at Domaine Morey

Anne Morey has taken over from father Pierre.

After that I went off to catch up with Tom ( The Hungry Cyclist http://www.thehungrycyclist.com) Kevill-Davies who has done an amazing job setting up his cycling holiday business in Auxey-Duresses. 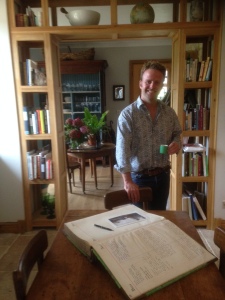 Tom and his visitors’ book! 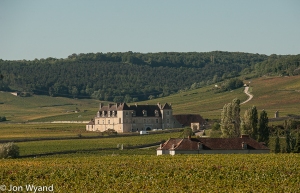 Saying goodbye to Clos de Vougeot and the sun is still shining !