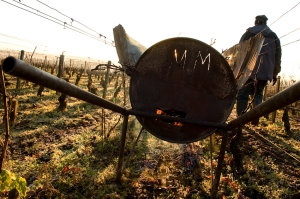 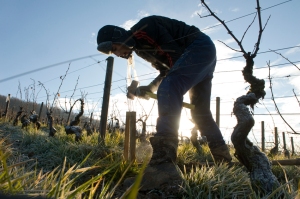 Pulling downhill is better than pushing up !

Monday morning begins with clear skies and that view of Mt Blanc again. While the extreme, windblown frost of Friday is gone the brouettes in Perrieres have a silvery edge. Cold, but not too cold for some pruning and I’m soon passed by the Bouchard tâcheron who works in Corton.
From Les Renardes the view over Ladoix is all mist and smoking chimneys, the blue haze contrasting with the warm early sunlight bouncing off the wires in Bressandes.
Again its a race to use this light before the frost is gone. I briefly disturb the friendly tâcheron from Les Hospices in Bressandes who, like the guy earlier in Corton remembers me from my June visit. Its reassuring that I am not one of several snappers on the Hill.
Sadly there is no coffee break at the épicerie in Ladoix, Monday is their day off. So its time to head round the corner to Charlemagne in search of some activity and perhaps a little cassecroute…
Bingo! i spot workers from Bonneau du Martray preparing to plant new vines as they dig away, bodies and breath steaming against the light. Below a couple from François André and their retreiver are feeding their brouette. Its very cold and tough work but everyone is happy to have the sun back again after a week of fog. Plenty to shoot and I just have time for a little baguette and saucisson before its time to move on.

A walk in the Bois de Corton

Sunday begins with coffee at the epicerie in Ladoix where I am to meet Sylvain Renaud, Vincent Sauvestre’s man in charge of his woods on Corton Hill.
The frost has gone but the fog remains as we trek into the woods, Sylvain’s saw over his shoulder, looking for things to cut up and any sign of life from the creatures inhabiting the wood.
What is already a beautiful space had taken on an a vaguely mysterious atmosphere in the fog and lacked only a sighting of the silhouette of a chevreuil to give it a mythical air.
No such luck, but I am invited to Sunday lunch with M.+ Mme. Renaud beside a very welcoming and efficient wood burning stove. Another walk after lunch yielded no sightings, even with Sylvain creeping around like a real backwoodsman. Then off back to the Rognets vineyards in search of anything before a shower and dinner chez Gaudillère. The fog is due to clear on Monday so a little sun would be useful. 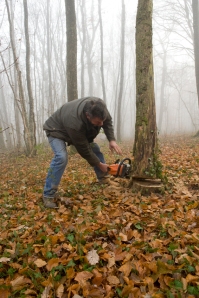 The affectionate Monsieur Renaud and his wife. 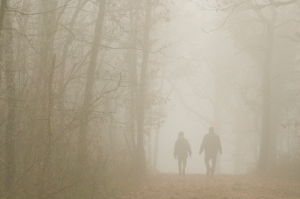 Photographing anything you have not experienced before, that is potentially dangerous, where no one speaks your mother tongue, may not be successful the first time…
You control nothing and don’t know what will happen next. A steep learning curve and, on a damp winter day when leaves cover loose stones and the moss is wet, its a slippery one. I spent the morning following as close as I could to one of the trackers whose job it was to drive boar or deer towards the waiting guns. Alternately struggling through undergrowth while trying to keep your feet and standing stock still while the tracker looks and listens for movement, you lose any idea of time, distance and direction. The sound of dogs barking, the bells on their collars tinkling to identify them, horns signaling a sighting of trail or beast and the staccato gutteral calls between trackers, even an occasional shot, all muffled by the trees give the situation a dreamlike, other worldly, quality.

I am not on the hill of Corton but in the Hautes Côtes with a group including a vigneron from Ladoix. Here we are above the fog and I even seen the sun for a few seconds. Its a long morning first waiting for the late arrivals delayed by motorway accidents and icy roads and then trekking unknowingly behind a guy with a rifle, a brass horn and bright orange jacket that in theory stops him becoming a target. I’m very glad of my high viz waistcoat that French law demands I carry in my car for roadside emergencies.
Not before time we are back at the hunters cabin where a four course meal has been prepared; quiche (who said real men don’t eat quiche ? French hunters take seconds!) followed by beef casserole, cheese and creme caramel, all accompanied by a glass or two.
In the afternoon I am left on the side of a coomb at an observation post and told the game will be coming from my right. An hour later a fully grown chevreuil crashes through the bushes on my left and passes not 20 metres across in front of me into the open. Naturally I am holding the wrong lens! But I have a wonderful view of speed and grace for a couple of seconds. A privilege.
Later, more activity to my left and another chevreuil dashes through the trees. I was sure I had a shot with part of him in the frame. Later inspection showed nothing, other than how hard it must be to shoot one those creatures.

Something to keep out the cold

A moment to stop, listen, and let the photographer catch up !

Lunch and friendship, both very important.

A welcome sight, the prospect of warmth and refreshment at the end of the day.

A bottle of wine ( or two )
are for sharing, along with stories.

Not a bad first experience and just maybe I have photographs of what French hunting is all about. And no animals were hurt producing the pictures !

My December visit coincides with a day’s hunting, a popular activity with local winemakers.
Fortunately I arrive in time to catch the last of the fog and frost that has lasted all week.
There is no pruning, its too cold, but someone is spreading a little something behind his tractor in Bressandes, presumably fertilizer, David Croix’s team are preparing the ground to plant new vine in Corton Grèves.