What has this do with Corton Hill you might ask…?
That’s the thing about Burgundy, you never know who or what you’ll discover next !

Its a real “bring your own” party, so much so that everyone gets their own tasting card to note everything they tasted, not always Burgundy either.

There must be speeches of course….

Its just a bit of a tight fit.

But there will be surprises.

Will there be a Paulée in Macau next ?

You never know who will come past. 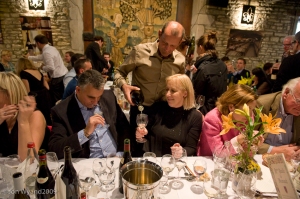 Who you will be sat next to… 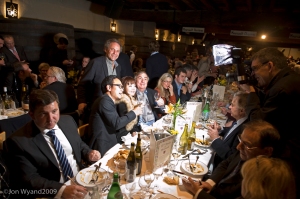 New friends are made.

Its all a lot of fun! 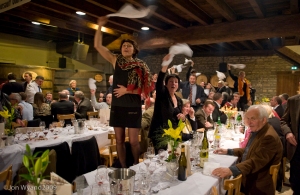 Here’s to next year! 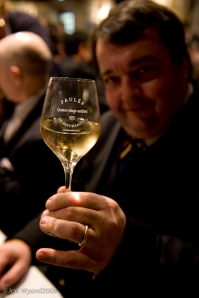 Pernand-Vergelesses in the Sunday morning fog

Mounir Saouma, Trappist monk turned winemaker, gets his ration of Corton Charlemagne at the Hospices new cellars near the modern hospital in Beaune

Photographers keeping out the way and waiting for the big moment

Frédéric Drouhin gets his lot

With a 20% increase in the price of white wines and 28% for the reds the auctioneer can smile.

An exciting game of handball at Pernand-Vergelesses, but “we” still lose 21-24 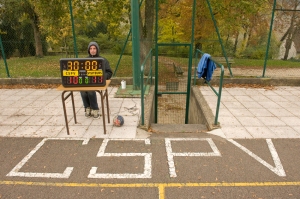 After a photogenically sunny morning on Saturday on the Hill which I regretted leaving, Sunday had a quite different atmosphere in the fog, much more mystery and intimacy until it began to lift.
I had wanted to avoid the crush at the new Hospices’ cellars so was there, shortly after opening, at 8.45. Its always useful to find old friends on hand to model without asking awkward questions, but it was a great surprise to run into Isabel Ferrando of Domaine St Prefert with her friends from Châteauneuf du Pape. Not too much time for chatting as I had to be in Pernand for a handball match starting at 10.30 – all part of the winemakers life !
After Sunday lunch chez Thierry and Christine it was back into Beaune centre in search of a parking space. Thierry’s advice only involved one slightly risky manoeuvre but proved the importance of local knowledge in parking matters.
I had been looking forward to getting into the hall early before it started to fill in order to catch up with the negociants who were supporting the book with their subscriptions and to encourage those that needed it !
However the Christies’ rule was that no journalists were allowed onto the floor of the hall before the start, no interviews or private chats then…. When we were allowed in there was a scrum to be among the first 10 let in. The rest had to wait until someone had had enough and came out. Anyway its a long afternoon and patience and politeness wins in the end.
Sadly, although prices were up due to another reduced harvest, the “President’s barrel”, Meursault Genevrieres this year (“only” a premier cru) made only half last year’s amount despite the charities guest auctioneer’s efforts to encourage the Chinese bidders at Maison Latour’s expense. Despite the scrum for entry it always surprises me how much the photographers co-operate and give way to each other, but then its France and they are all in the same union I suppose…
Gave up at around 5 p.m. to meet the publisher who is interested in my little book. It went well but I still await the paperwork. More news there as soon as I have it. Its been a long wait…

Tasting in the cellars at Château Corton André

Roland Masse in front of the world’s wine press, well those interested in Burgundy anyway.

My target for this trip was to shoot the Vente des Vins weekend in Beaune in relation to the Hospices vineyards on the Hill plus a handball match at the Pernand-Vergelesses sports club.
The Saturday started with the barrel tasting at the old Hospices Cellars in rue Louis Véry and a struggle through the throng patiently waiting their chance to taste. I was hoping to find a barrel of one of the Hospices’ Corton Hill sites and managed to find Cuvée Dr Peste from Corton before having to leave to reach the Palais de Congrés for an appointment at 10.00 with a client. The wine fair there is, for a few euros entrance including your glass, a great way to explore the wines of Burgundy from Auxerre to Macon and meet some of the winemakers doing the, very careful, pouring. After my time restricted lunch I rushed off to a cellar tasting at Château Corton André, the iconic image of Burgundy with its colourful tiled roof, in Aloxe Corton.
Then its back to the Hospices and the press tasting where I had the chance to meet old Hospices acquaintances and photograph the winemaker, Roland Masse. Have n’t tasted a thing all day apart from lunch. Time for a shower before leaving for a tasting and dinner in the Château de Savigny hosted by Château Corton André. My chauffeur is old friend Thierry Gaudillere from Bourgogne Aujourd’hui. We are the first depart around midnight having shared an interesting table with a crew from French TV station TF1.
I want to be up on the Hill by 7.30 on Sunday morning for an hour before Sunday’s programme begins… 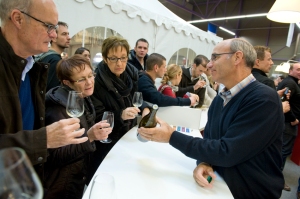 All the fun of the Wine Fair

I wonder how many baguettes and saucisson ? 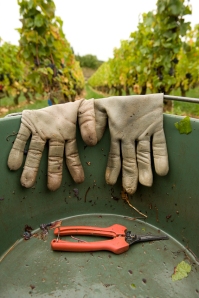 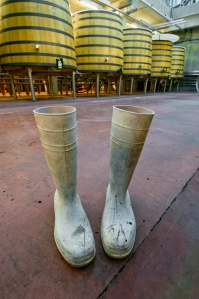 A busy few days in Burgundy coming up so no posts for a week or so. Then there’ll be something on Hill activity at the moment and the fun and games of the Hospices weekend.

Many a good tune….

Homage to Elliott Erwitt in Pernand-Vergelesses

Two things caught my eye photographically this week. I see Nikon are launching a new digital model that resembles the old FM2 film camera…It seems a little strange as even I, a Nikon user for many years, 30 shooting film, have moved on. Not a novelty, (or is it ?) the spec seems aimed at professionals rather than amateurs. Probably photographers of a certain age….
Talking of which I read that Elliott Erwitt, a famous, not least for his images of dogs, American photographer has just completed a 33 day assignment (on 3 visits) to photograph Scotland as a promotion for a whisky company.
Nice job! Good to know there are still jobs out there for 85 year olds !
So it’s true, that joke on a mug I was bought years ago: ” photographers never retire, they just go out of focus” !

On the subject of wine, I’m afraid didn’t have any books by Clive Coates. My wine library, with the exception of the two great works by Anthony Hanson and Jasper Morris, is made up of either contributor’s copies containing my snaps or interesting old stuff on Burgundy from charity shops. However Mr Coates, who never seems to see a place for photographs in his books, will find, I am pleased to say, a shot of mine on the cover of “My Favourite Burgundies” recently published by University of California Press.
I would not dare review a wine book, and only very rarely a photography book, so I can only say its a very good read and the maps of his chosen vineyards, that show who owns what, are a very interesting addition for anyone who manages to get into the vines.
Next time I need to shoot Christophe Roumier’s parcel of Bonnes-Mares, I won’t need him as a guide. How I wish there had been a vineyard profile of Le Charlemagne !

I see Jancis and Hugh have been flying their Wine Atlas flag in the US and I look forward to seeing my copy of the latest edition from two incomparable writers.

Having contributed not inconsiderably to Jasper’s ibook version of Inside Burgundy I’m tempted to say it is the future of winebooks. Have you ever carried Inside Burgundy in print any distance ? Add the pictures and videos to the package and it shows how exciting wine books can be. The problem with photographs has always been the cost of reproduction which is why my unpublished epic, http://www.blurb.com/books/1000837-je-suis-dans-la-vigne-a-year-in-burgundy still lives only on the net. Having a famous author and some text might have helped of course….

What this is all about.

I bet some you are wondering what this is all about.
Well I said at the start I’m working for a year towards a book about Corton Hill in Burgundy. The vineyards, the work and workers and their communities of Aloxe-Corton, Pernand-Vergelesses and Ladoix-Serrigny. At the same time I am producing a six page article for four issues of World of Fine Wine. I thought seriously about the possibility of living there while I did it but in the end could not arrange that satisfactorily. So now I go at least a week per month to cover what I need to see. At the same time I am doing other wine and non-wine assignments as a working freelance.
What has inspired this whole project has been 15 years of visiting Burgundy and seeing what wine drinkers mostly don’t. I happen to think we would all enjoy a glass of wine more if we had a more intimate knowledge of its origins. Too many of us look at labels and think they tell us everything we need to know. I’m trying to to go a little further and show what labels cannot; that is the human element. Why do we value what is hand made above something a machine produces ? Answers on a post card please…
Being there yourselves is the best way, but if you can’t, photos can tell you a lot.

was the test run for Corton but its too expensive to publish without a rich patron. (Any out there..?)

The book has a French publisher who needs 2000 copies pre-ordered and to date 46 growers have ordered 1510. Of course a lot of the other 25 have better things to worry about than books at the moment, but we will get there. So meanwhile I keep shooting with a target publication date of Autumn 2014. This book will also have proper writers who know the history, geology, bio-diversity and wine making from a local point of view to make up the other third of the 240 or so pages.
And think in terms of 45-50 euro if you don’t pre-subscribe.

But I’m not here to sell, really, just to let you know what all this is about.

Sometimes things just need a bit of a push, but we get there in the end !

A little of what you fancy….

A nice drop of Aligoté in fact. 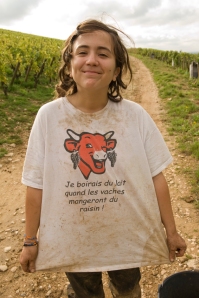 We know who’s side she’s on. 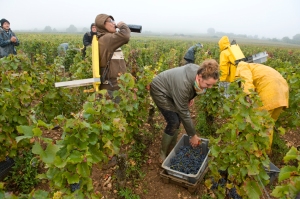 Could that be water…?

A cork is usually the giveaway

I would n’t drink water that colour…

We’re all in this together

There is track, with tempting asphalt at both ends, that runs from the western Pernand-Vergelesses end of Charlemagne to Les Pougets above Aloxe Corton in the south. However, the middle section is a dirt road not that is, in places, not for the faint hearted. Best walked really. At harvest time there is a lot of activity and traffic. An interesting place to be when you don’t know who you’ll meet… 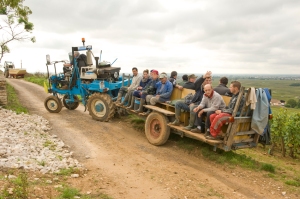 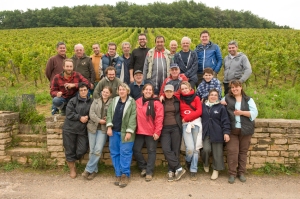 Some of Chapuis’ finest

Its not all hard work

Editing 2 weeks seems to be though!
Thought it might be worth showing the lighter side of harvest rather than to many cutters and carriers. I had the opportunity to share meals regularlywith the pickers while I was working and also received invites to three end of harvest domaine paulées. All great fun. 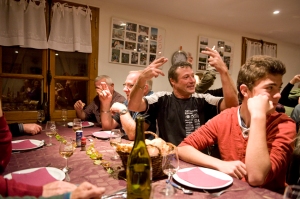 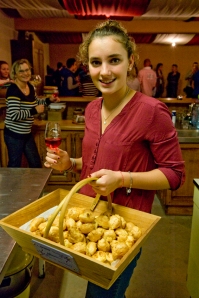 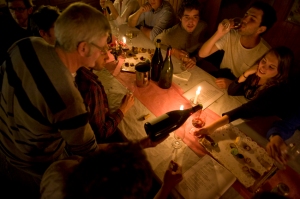