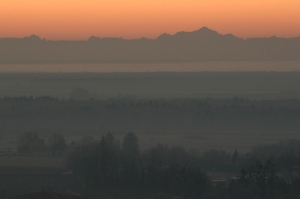 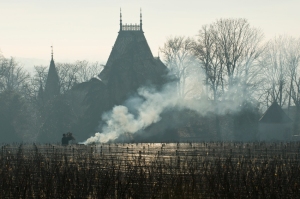 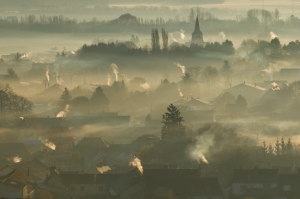 Pulling downhill is better than pushing up !

Monday morning begins with clear skies and that view of Mt Blanc again. While the extreme, windblown frost of Friday is gone the brouettes in Perrieres have a silvery edge. Cold, but not too cold for some pruning and I’m soon passed by the Bouchard tâcheron who works in Corton.
From Les Renardes the view over Ladoix is all mist and smoking chimneys, the blue haze contrasting with the warm early sunlight bouncing off the wires in Bressandes.
Again its a race to use this light before the frost is gone. I briefly disturb the friendly tâcheron from Les Hospices in Bressandes who, like the guy earlier in Corton remembers me from my June visit. Its reassuring that I am not one of several snappers on the Hill.
Sadly there is no coffee break at the épicerie in Ladoix, Monday is their day off. So its time to head round the corner to Charlemagne in search of some activity and perhaps a little cassecroute…
Bingo! i spot workers from Bonneau du Martray preparing to plant new vines as they dig away, bodies and breath steaming against the light. Below a couple from François André and their retreiver are feeding their brouette. Its very cold and tough work but everyone is happy to have the sun back again after a week of fog. Plenty to shoot and I just have time for a little baguette and saucisson before its time to move on.

This entry was posted on December 29, 2013 by jonwyand. It was filed under Uncategorized .