Taking a break from planting in Les Pougets

February saw my first face to face meeting with the team from Editions Glénat who are publishing my Corton book. We met in Pernand with my little steering group of winemakers who have been getting the book off the ground by getting their fellow growers on Corton Hill to buy multiple copies of the book to reach the target of 2000.
They have not commissioned my work, I am independent in how I approach the subject. But what do I know ? I must take advice on what Corton and the villages are all about and then build my own picture from my point of view, not their’s.
We have well over 60 growers subscribed and have managed without assistance from any sponsors, including the BIVB. Of course the negociants are big subscribers but there is no favourable treatment, my aim is to involve as many owners as possible in the project as the small parcel owners can be even prouder of their ownership of the Corton appellations.
I am not producing a guide to the wines of the Hill, more celebrating the place itself, the vignerons who work it and the communities around it.
It seems to be a formula that’s appreciated here otherwise there would not have been the support I am so proud to have received. Photographically, its very much a story told from the grower’s perspective I hope, so there needs to be a lot of consultation.

The meeting went well and everything is on course for a November publication in French but with a number of copies in English.
I knew from the start Corton had a story that could not be told in pictures alone so we have a writer to compliment 170-odd pages of photography through a year on the Hill and in the villages.
While the photography is not quite finished I have had to edit what I have shot so far in order that the editor can get started and the growers offer advice on what I may have missed.

Well that was a long job and a tough one and the reason this post is so late !

I have two visits in March, one to meet up again with the publisher and growers to get their feedback, and the second to see how Corton presents itself during Burgundy’s big biennial promotional week, Les Grands Jours de Bourgogne 17-22 March when its possible for the press and wine professionals to taste all the Burgundian appellations from Chablis to Macon as they move south. In early April I will team up for a couple of days with the writer to help him see the Hill from my point of view.

Apart from the meeting I was able to observe the work on the Hill in sun, wind and rain, as well as meeting the new and former owners of Maison Jacques Copeau in Pernand-Vergelesses. I was able to take a look around inside this shrine, once home to the great French man of the theatre http://en.wikipedia.org/wiki/Jacques_Copeau .

Married couples often share the work as tâcherons, as here in Les Pougets

A new wall goes up in Les Renardes, they want me to see it finished !

The church in Bagnot, 15 minutes East of Ladoix-Serrigny has some glorious medieval wall painting. This one is part of a calendar but the devil paintings are the big attraction here !

A gruesome 17c tomb in the church in Ladoix- Serrigny 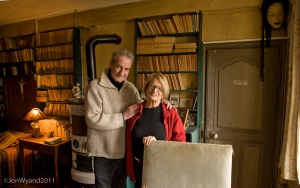 Jean-Louis Hourdin, another man of the theatre and new owner of Maison Jacques Copeau along with Catherine Dasté, Copeau’s grand-daughter

Jacques Copeau’s bedroom, kept as it was during his lifetime. The vineyards of Charlemagne can be seen from his window.

This entry was posted on March 8, 2014 by jonwyand. It was filed under Uncategorized .